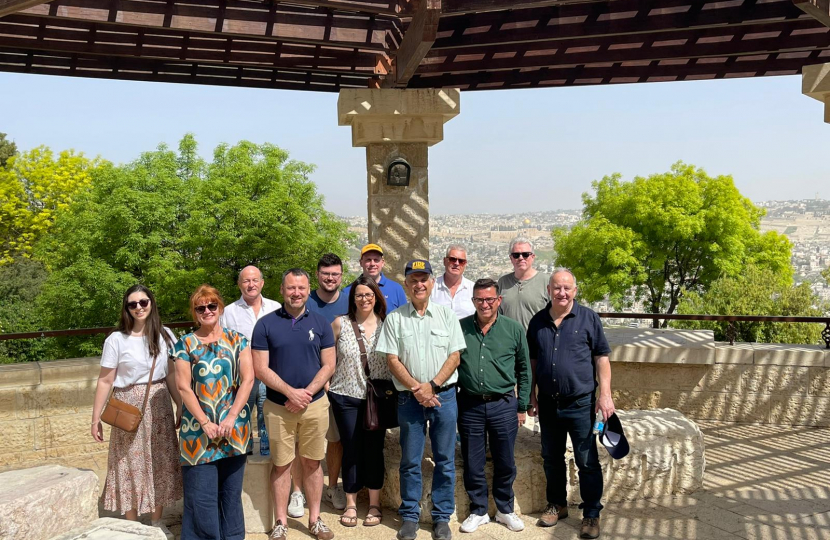 MPs get hundreds of emails every year about the conflict between Israel and the Palestinian people living in the Gaza Strip and in the West Bank, my inbox is no different. The overwhelming majority call for a better deal for the Palestinian people. Now this may not mean a great deal to the vast majority of Ashfield folk, so I decided to look for myself last week when I joined a delegation of 11 Conservative MPs on a trip to Israel to get a better insight into the problems on both sides of the borders. This was not a taxpayer funded trip and I attended in my own time.

We spent the first few days in and around Tel Aviv where I particularly enjoyed our visit to the Israel Defence Forces base. This is the first time they have allowed a group of MPs in their control room near to Gaza which is basically a room where young Israeli soldiers are constantly monitoring cameras pointing at the Gaza Strip who have in the past launched rocket attacks. Their ‘Iron Shield’ defence system protects Israel. They instantly retaliate with their own anti-rocket defence system which takes out at least 10% of the rockets launched. This was an amazing thing to see but what was more amazing was the young men and women in the command centre aged 18 to 22 who were doing their National Service by defending their country from attack. We spoke with many Israelis and Palestinians to listen to both sides of the argument.

It was quite clear during the visit that the Israelis want to see an end to the violence and are willing to make massive land concessions in order achieve this and 50% of Palestinians according to polling agree. But shockingly nearly 50% of Palestinians think that violence is acceptable to achieve their aims which is good news for Hamas who control the Gaza region and make a lot of money from controlling the 2 million Palestinians who are crammed into a tiny strip of land.

The Israelis have been making concessions and last week issued 20,000 work permits for Gaza residents to work and earn more money in Israel, but this was greeted by a terrorist attack in Tel Aviv last Thursday night where two people were shot dead in an area we had visited just 24 hours earlier.

Peace can only come with concessions and ending violence should always be the first concession.