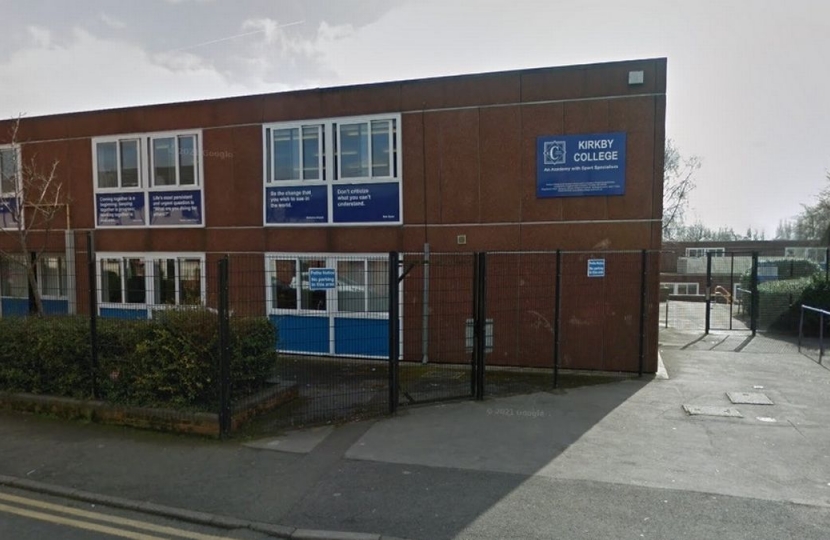 Lee Anderson, MP for Ashfield, has requested an immediate meeting with senior leaders at Kirkby College after what the MP called a ‘devesting’ Ofsted report.

The school was rated as inadequate after the inspectors reported frequent bullying, a poor quality of education, poor leadership and management of the school and expectations set far too low for students. Many students complained of feeling unsafe with pupils using homophobic, misogynistic and transphobic language without reprimand.

The report stated that the school is ‘preparing pupils poorly for life in modern Britain’.

Mr Anderson has reached out frequently to the failing school since being elected but has been disappointed that the leadership has not accepted the failings that are clear to all.

The school was recently selected as 2 of 50 schools that will be rebuilt or repaired as part of the second round of the Government’s School Rebuilding Programme (the other being Ashfield School, also in Kirkby). Despite making this a pledge upon being elected and bringing Ministers to Ashfield to lobby for the money, the leadership of the school has denied there is a problem time and time again.

“The leadership at Kirkby College must now reflect on what is actually happening at this school. They can no longer hide from it and must recognise that they are letting down hundreds of children year after year. The future of Kirkby College is so bright, the funding I have secured will help to deliver modern learning environments for pupils, including options such as new classrooms, science labs, sports halls, and dining halls.

The school will become a brand-new Multi-Academy Trust. Multi-Academy Trusts have successfully turned around failing schools up and down the country and it is only fair that pupils in Ashfield are afforded the same opportunity to attend a world-leading school – something the school is not currently providing for our community”.

As well as delivering world-class learning environments for pupils, the School Rebuilding Programme will also create opportunities, jobs, and apprenticeships - from the construction industry to suppliers, businesses will be offering training as part of their involvement in the projects.

I will work with the Government and our local schools to improve school standards across Ashfield & Eastwood.