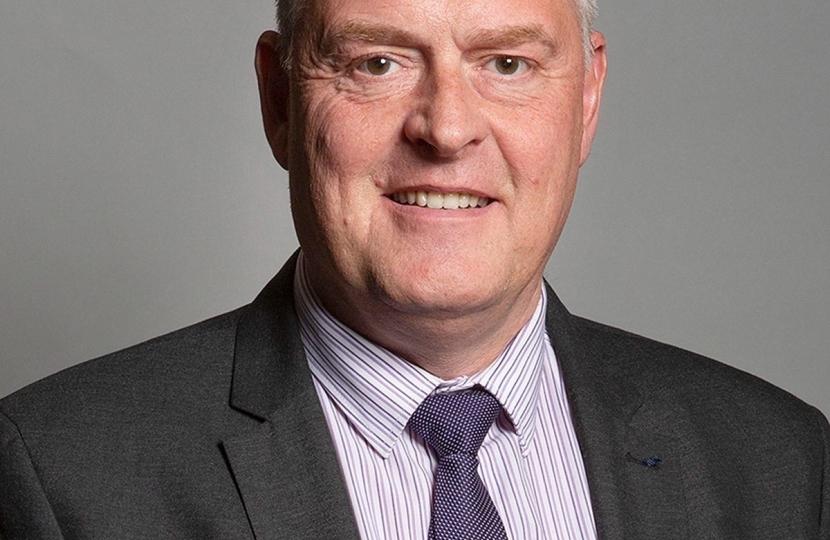 The married dad of two, raised in Huthwaite, is the area’s first MP born and educated in Ashfield. Aged 53, the plain-speaking, often controversial Conservative says he has helped more than 5,500 people in his first year.

He has spoken in 50 debates, statements and question sessions in Parliament – more than other previous Ashfield MPs, and has had Brexit and coronavirus to deal with.

A firm Brexit supporter, he was one of the people shouting at the TV as MPs tried to block it. "The people made their decision and I’m proud to be part of a government that is delivering on it,” he said and “I’m looking forward to Britain taking back control – more important than ever after Covid.”

Elected in December and opening his office in February, the first lockdown struck in March.

He hit the national headlines in November when Boris Johnson had to isolate after meeting with him at Westminster, when the Ashfield MP later tested positive for coronavirus. Lee wasn’t ill, but lost his sense of taste.

As the pandemic hit, the MP said he was “determined” to help. His staff worked from home or at outdoor surgeries. When allowed he visited businesses in Ashfield’s three town centres, ensuring people got aid, including business rate relief, business grant schemes and self-employment grants and says £2.4 million was given to Ashfield District Council in emergency funding.

He has also talked to schoolchildren joining in Zoom or Teams calls.

Welcoming the vaccine, he said: “Covid has impacted everyone with people unable to see relatives or do what they usually do, the vaccine is the light at the end of a very dark tunnel.”

He praises the NHS. His wife Sinead had a double lung transplant a few years ago. “The outstanding treatment my wife receives from the NHS is what makes me proud to be British. It is first class and the envy of the world.”

Other proud moments included meeting 18-year-old Jacob Fradgley, who has a rare cancer.

He said: “I’m totally in awe of his fighting spirit – a young man who doesn’t complain, still laughs, a true soldier in every sense of the word.”

He said he also takes pride in efforts to get a Freeport at East Midlands Airport, a government designated area with little to no tax to encourage economic activity.

Another achievement was the Street Poppy appeal raising £7,000. Lee managed to source poppies, when they were unavailable, for the constituency.

His first campaign was to get Ashfield District Council to agree to free parking and he has spent time at Kings Mill Hospital, even volunteering on Boxing Day.

He is proud of securing money for high streets and town centres through lobbying. “The Future High Street Fund is worth up to £25m and the Stronger Towns Fund will provide up to £50m for Sutton and Kirby,” he said.

He got £15,000 in residents’ holiday refunds and a £50,000 business grant for a company refused finance due to an error.

But his biggest challenge has been “trolling on social media.”

"I worry it could stop people becoming active in politics. I have been told I should be hung outside and shot, a representative from a political party threatened to break my legs in Sutton.”

Undaunted, he has a vision for his next 12 months.

“Let’s be proud of who we are and where we come from. We have DH Lawrence, Ollie Hynd, Ada Lovelace to name but a few. Our children should be taught about these legends and be proud. We need to come together and rebuild after the pandemic. It’s time to celebrate who we are.”

Future projects include geothermal energy produced from old mine workings, lobbying for a Sutton town clean up, CCTV and dealing with rats.

As an ex-miner at Sutton, Wellbeck, Manton and Creswell pits, Lee is keen on heritage. At Silver Hill Colliery, headstocks are being restored.

He previously worked at Framework before getting a job with former MP, Gloria De Piero.

“Levelling up” is on his latest agenda too."We need to equalise the regions. Nowhere is this more apparent than areas like Ashfield. Levelling up includes investment in local infrastructure, education, transport and job creation."

He wants the Maid Marion line reopened to passengers and calls for a new station at Kings Mill Hospital, trains going through Selston to Nottingham and has secured £50,000 for line viability testing.

He is urging schools and community groups to apply to The Woodland Trust giving away trees to plant. He visited Brierley Hill forest to launch the message on December 18 and visited Kirkby-in-Ashfield business Check-Able.

When he’s not being an MP Lee likes to walk with his West Highland terrier Alfie who he ‘spoils rotten.’ He also likes to watch Mansfield Town.

His sons Harry, 26, and Charlie, 30, work for the Environment Agency and Severn Trent respectively. He raised the boys alone.

Lee enjoys dining in Ashfield and Eastwood eateries, preferring them to London. He has been going to The Diamond Club on a Saturday for as long as he can remember.

A little known fact is he a “big fan” of Elvis and Shakin Stevens. According to aide Melanie Darrington, he’s known to listen to the 80s legend on repeat!

She added “While his wife loves fashion, Lee has never spent a lot on clothes. His suits often come from ASDA and in 20 years’ time they probably still will!”

Lee summed up “I am incredibly proud to represent Ashfield. While I enjoy my time in Parliament, the best thing about being the MP is getting back to Ashfield. It’s a privilege to be the voice of people you’ve know all your life.”