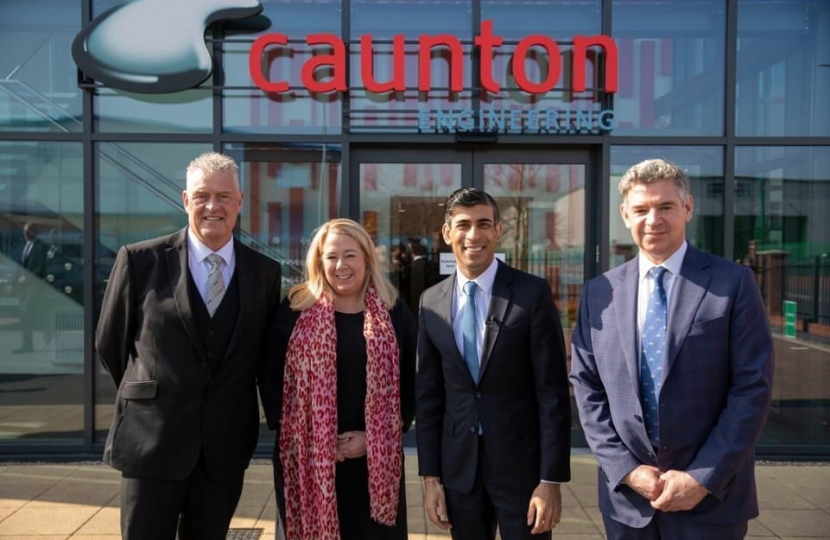 Lee Anderson, MP for Ashfield and Eastwood, was joined by the Chancellor of the Exchequer, Rishi Sunak at local firm Caunton Engineering.

The family-owned firm has 50 years of experience in the sector and recently delivered steelwork for the new Museum of Liverpool. Caunton employs 250 people and is one of the UK's leading fully automated structural steelwork contractors.

The Chancellor, along with Mr Anderson, toured the facility and sat down with employees and apprentices to discuss how the Spring Statement would impact them.

The Spring Statement was delivered as the country faces a cost-of-living crisis. The Chancellor explained how Covid and global factors meant that goods and energy prices were already high with inflation in February at 6.2%. Disruptions to global supply chains and energy markets combined with the economic response to Putin's aggression and the resulting war in Ukraine means the OBR expect it to rise further, averaging 7.4% this year.

Plans to support households included a Tax Plan that delivers the biggest net cut to personal taxes in over a quarter of a century. Fuel duty was also cut by 5p and will save the average car driver £100 over the next year. National Insurance thresholds are to be increased - giving a tax cut to 30 million employees with the typical worker saving over £330 a year. The first cut to the basic rate of income tax for 16 years will start in 2024 ensuring people keep more of what they earn.

Rishi Sunak said:
"While we face uncertain times ahead, I cannot shield everyone from the global challenges we face. However, these announcements will deliver a stronger economy and puts billions of pounds back into the pockets of hard-working families across the UK".

A meeting was then held with business leaders from across the constituency so that they could direct their concerns directly to the Chancellor. Concern was expressed that the fuel duty cut may not be passed on, the Chancellor confirmed he had contacted all fuel suppliers to take the 5p off immediately with some of the big supermarkets doing so instantly. The cost of steel was a big concern and was pushing the costs of manufacturing up week by week due to the war in Ukraine. One businessman said "'Forget Brexit and forget Covid. We coped with that. Our biggest challenge yet is the war in Ukraine and how that is impacting the price of steel which could ultimately affect hundreds of thousands of jobs throughout the UK".

Most businesses had felt optimistic prior to the war starting with all advertising for staff.

Lee Anderson said:
"During the pandemic there had to be increased borrowing to pay for furlough, business support grants, PPE etc... and a valid point made by businesses was that furlough had saved every single one of them from closing down, saving thousands of jobs in the Ashfield area. It was the same with the hospitality business where the 'Help Out To Eat Out' saved thousands of jobs in the hospitality sector. But this came at a cost of over £400 billion and the debt repayments now stand at £83 billion a year which is a few billion short of what we spend on education every year in this country.

The debt must be paid back through the tax system, and it is the Treasury's job to ensure we pay it back in a way that causes the least harm to people and businesses which is what yesterday's Spring Statement tried to achieve".