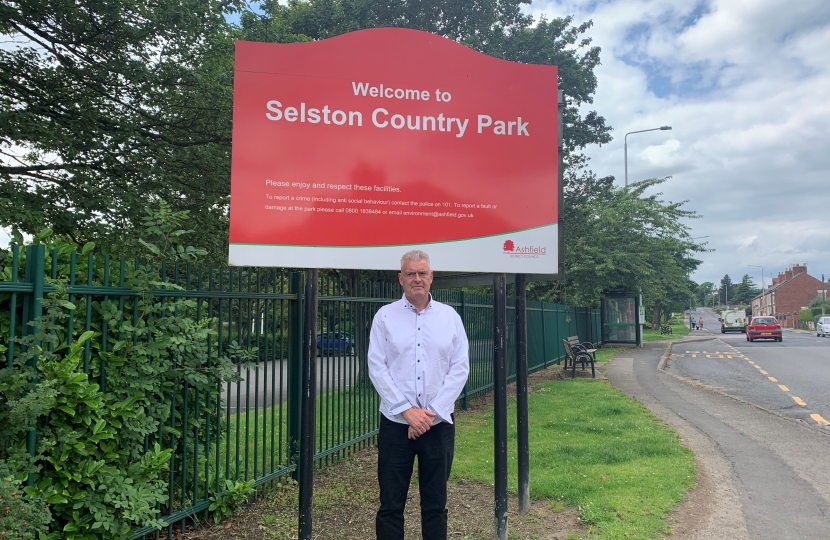 Lee Anderson, MP for Ashfield and Eastwood, was delighted to learn that his lobbying of the Prime Minister is paying off to improve local trainlines.

Prime Minister, Boris Johnson, mentioned the MP in the foreword to the Integrated Rail Plan for the North and Midlands which was launched on 18 November 2021. The document presents the Integrated Rail Plan which sees the biggest ever government investment in the rail network, redressing decades of underspending in the Midlands and North, and levelling up the country. This includes the HS2 station in Toton and electrification of the Midland Mainline.

‘In my discussions on HS2 last year, I was struck by what one of my parliamentary colleagues, Lee Anderson MP, told me: that his constituents in Ashfield would have to watch the high speed trains go through at 200mph without stopping when what they really wanted was a decent bus service to the next town. Levelling up means delivering that bus, just as much as better train services to London and other cities. And integration, as described in this Plan, means improving and tying together local, regional and long-distance transport to provide better links for everyone, not just those travelling between our biggest places’.

The MP, elected in December 2019, has made no secret of his desire to improve the train links in the constituency. Re-opening the Maid Marian Line to passengers , which runs through Selston, is a central aim. A £50,000 feasibility study was secured from the Restoring Your Railway Fund by Mr Anderson in order to see if the line could re-open.

Today that step has moved a step forward with the Transport Secretary eager to pursue this as part of the Integrated Rail Plan (IRP).

If this goes ahead, it will support some of the most disadvantaged communities where wages are lower than average to be able to access  jobs.

A commitment to the Midland Mainline electrification is something MPs have called for over many years, now the Government has committed, it is really positive news. Journey times will improve and  journeys will be greener and cleaner. Moving to new electric trains will take out the old diesel engines. Contactless ticketing will also make things simpler for passengers at all mainline stations.

Mr Anderson believes the East Midlands Region is the big winner from the government announcements. Historically being the most underfunded region of the UK, these announcements demonstrate the governments commitment to Levelling Up. Countless high quality jobs will be brought to the area with many Ashfield companies determined to play a part in the areas regeneration.

“I have always been passionate about improving our railways. Good transport links mean better access to jobs, our towns and cities. People in Ashfield want to hop on a local train or bus. The HS2 Eastern Leg means nothing to them.

Rest assured I will be continuing my lobbying of Government to ensure these plans are delivered as soon as possible.

My goal is that if you live in Ashfield, you can get on a train near your home and directly go to London”.

Restoring old Railway lines such as the Maid Marian Line will help improve access to jobs and more for those in rural Ashfield & Eastwood.