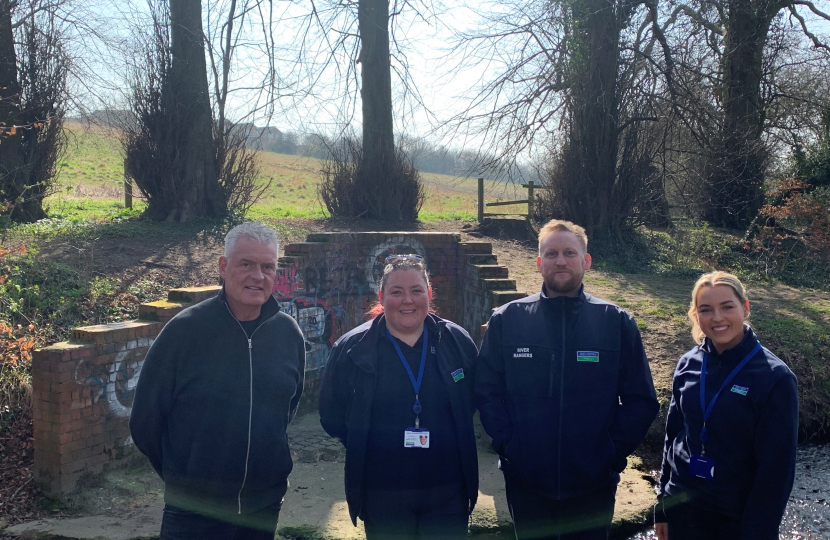 The MP has been in touch with residents about the contentious site. Severn Trent have a permit to use the beauty spot as a storm overflow. The permit agreement between Severn Trent and the Environment Agency allows it to discharge diluted sewage into the brook to prevent it backing up into peoples' homes.

Residents have complained to Mr Anderson and the Skegby Councillor, Melanie Darrington numerous times regarding the overspill as  discharge from the pipe often creates a foul smell. The area also looks unsightly as it covered in graffiti, has brick work removed and worse still has remnants of sanitary towels and wipes trapped in the grill.

With Severn Trent appointing a new manager for the area, the MP was eager to visit the brook to discuss the matter.

Severn Trent explained that the overflow had been used three times in the past year. In periods of excessive rain, the overflow is used to avoid flooding in the area. A new system is in operation which immediately notifies the crew when this has been triggered, Severn Trent can then immediately clear up  the area. CCTV will soon be installed in a bid to stop people vandalising and littering.

Mr Anderson acknowledged that the clean up operation was better and shared residents frustrations regarding the graffiti and littering and asked Severn Trent to also consider using a shield to skim off the sewage debris. The utility company will explore the possibility and also that of installing a hood over the drain. The bricks around the site will be replenished and tidied up too.

“This was a productive meeting. The team at Severn Trent seemed open to my suggestions and seemed eager to make the area better. I will continue to liaise with them. Residents are also encouraged to let them know of any issues as this increases the chances of us getting the improvements. Feel free to let me know about complaints at Skegby Brook by emailing me at lee.anderson.mp@parliament.uk and I will feed your comments to Severn Trent”.